On December 2nd 2015 Sandlaw Farming, headed by Banchory resident Fred Duncan, submitted a new application seeking immediate approval for "Planning Permission in Principle" for a 300 home development on part of the main Braehead site south of Banchory. Planning permission in principle is an approval for the principle of the development on a site, without specifics such as design, landscaping or access yet determined.

On April 28th 2016 at a full meeting of Aberdeenshire Council the chamber was told in detail the official reasons why the application should be rejected and they chose to support these unanimously. From the Council report these reasons included:

4.  Due to its scale and location on the south bank of the River Dee on an unallocated site, the proposal will have a detrimental impact on the existing landscape character and setting of Banchory.  The proposal is therefore contrary to Policy 12 Landscape conservation and SG Landscape1: Landscape character of the Aberdeenshire Local Development Plan (2012).

5.  The proposed location of the community centre, on an unallocated site which would not be in an accessible location within the settlement, does not comply with Policy 8: Layout, siting and design of new development or SGLSD7: Community Facilities of the Aberdeenshire Local Development Plan (2012).

6.  The site requires alterations to the road network and Bridge of Feugh which currently cannot show that they will be safe, convenient for pedestrians, cyclists and public transport or cause minimal impact on the character of the site and the surrounding area. In addition, taking into account existing, committed and proposed development scenarios, it has not been adequately demonstrated that there will be no adverse traffic impact (no net detriment) created on the wider road network (A93/Raemoir Road junction).  As such the proposal would be contrary to Policy 9: Developer contributions and SG Developer Obligations2: Access to new development of the Aberdeenshire Local Development Plan (2012).

7.  The proposal would require alterations at the Bridge of Feugh, potentially including a new bridge which, subject to design and location, has the potential to result in a detrimental effect on the character, integrity and setting of the category B listed Tollhouse and Bridge of Feugh contrary to Policy 13: Protecting, improving and conserving the historic environment and SG Historic Environment1: Listed Buildings of the Aberdeenshire Local Development Plan (2012).

8.  By virtue of its scale and location the proposed development would deter tourists from the local area and have a direct impact on Scolty Hill, the River Dee, Falls of Feugh salmon leap, fishing amenity and general recreational uses in the area to the detriment of the local tourist industry and economy.

9.  The proposed development would move Banchory Primary School beyond capacity in 2018-19 and Banchory Academy is already at capacity. The proposal would therefore put pressure on existing education facilities in the town.

10. The proposed development is in an unsustainable location due to being outwith the settlement boundary and the possible routes available to walk to school would result in reliance upon the private car, which in turn renders the development unsustainable and detrimental to the environment and air quality of the surrounding area.

11. The proposed development would result in additional surface water which would require a Sustainable Drainage System designed to avoid flooding and pollution within the site and beyond its boundaries. The proposal does not adequately
demonstrate how the treatment of surface water from the development can be accommodated without a risk of flooding and pollution and as such it is considered that the development does not currently comply with Policy 9: Developer contributions or SG Developer Contributions3 Water and waste water drainage infrastructure of the Aberdeenshire Local Development Plan (2012).
CLICK HERE TO LEARN MORE ABOUT OUR OBJECTIONS 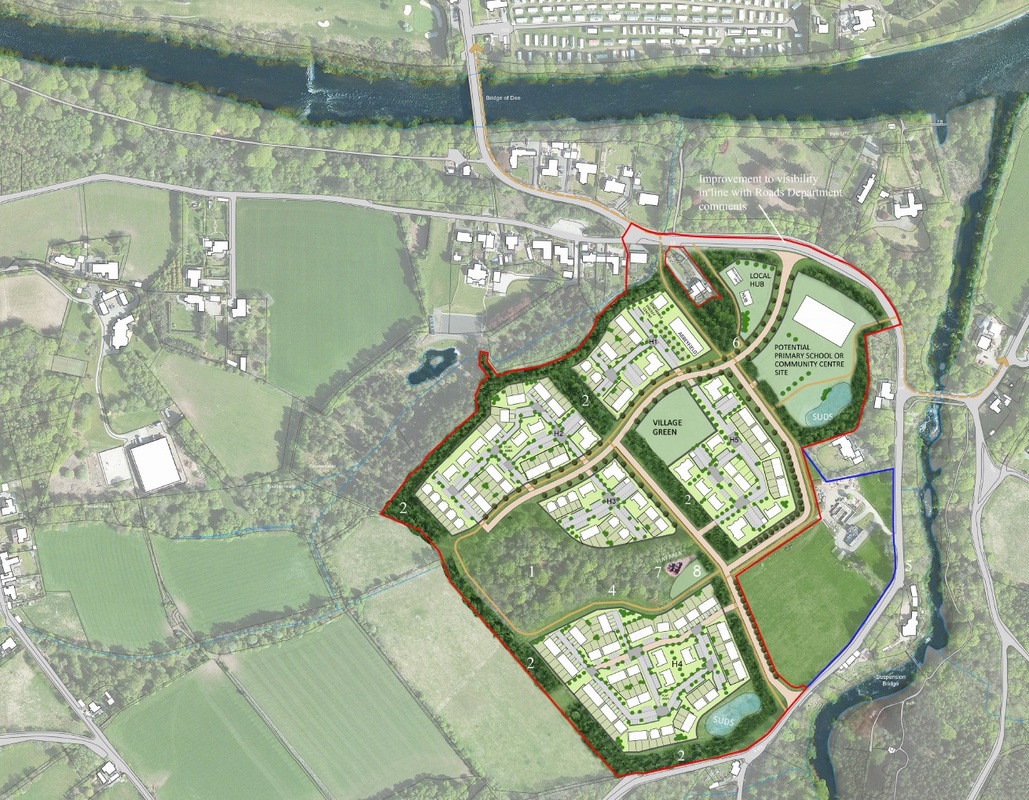